After the Heart of Christ: Priests ordained for Perth

After the Heart of Christ: Priests ordained for Perth

The assembled priests and servers at the conclusion of Fr. Matthew Hodgson’s Solemn Mass of Thanksgiving.

On the Feast of St. Casimir, His Grace, the Most Rev. Timothy Costelloe promoted five men to the Sacred Order of the Priesthood for service in the Archdiocese of Perth: Matthew Hodgson, Jerome Truc Ba Nguyen, David Adan Ramirez Nieves, Rodrigo da Costa Ponte and Giovanni Raffaele. 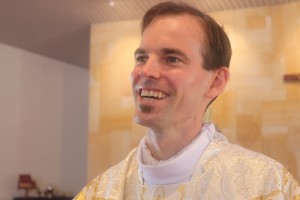 It was standing-room only in St. Mary’s Cathedral on Victoria Square, as Christ’s faithful gathered to witness this momentous occasion, when the Archbishop of Perth raised up, by the laying-on of hands, five new shepherds to be his assistants after the heart of Christ, sharing with them his three-fold office of governing, teaching and sanctifying the flock. The poignancy of the moment was palpable as the chanting of the Litany of the Saints echoed through the Gothic cathedral whilst the five ordinands lay prostrate on the sanctuary pavement.

In his homily, the Archbishop reminded them of their own fragility, for ‘a priest who does not know he is a sinner will never be an effective instrument of the Lord’s merciful compassion’. Addressing the ordinands directly, he enjoined them never to cease their pursuit of Jesus Christ: ‘I ask you, Matthew, Rodrigo, Truc, Giovanni and David, to be priests after the heart of Jesus. … Be priests in whose eyes, and in whose smiles, and in whose words, and in whose tears, people encounter the face and the heart of Jesus. … This is what the Lord is asking of you as He draws you tonight into the mystery of the ordained ministry as priests. It is what we, the People of God, so desperately need from you.’

Of the five newly-ordained priests, Fr. Matthew Hodgson alone underwent formation for priestly ministry here in the Seminary of the Good Shepherd, entering the first-year programme in 2009. There was nonetheless a sizeable contingent who undertook the long journey from Sydney. The Seminary was represented at the ordination by Fr. Danny Meagher (rector), Fr. Ed Travers (spiritual director), Sr. Lydia Allen (human formator) and twelve seminarians from various dioceses, as well as Matilda (chef) and Fr. Gerard Kelly (president of the Catholic Institute of Sydney).

The contingent of staff and seminarians from the Seminary of the Good Shepherd inside the parish church of St. Damien of Molokai, Dawesville.

Fr. Matthew had trained as an aeronautical engineer, but God vouchsafed him the grace of conversion in the sacrament of penance during the Youth Leaders’ Formation Course, where he made his first confession since, in fact, his first confession. He thus came to embrace his faith for the first time, and to seek actively after God’s will. In time, he came to realise that the Lord was calling him to serve His children as a priest. 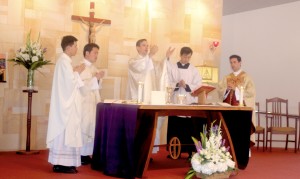 On the next day, Fr. Matthew celebrated a solemn mass of thanksgiving in the church of St. Damien of Molokai (Dawesville), his parents’ parish, so far south that it was no longer in Perth, but in fact to be found in the neighbouring Diocese of Bunbury. He asked if the Seminary’s Schola Cantorum would sing—a request we were happy to accede to, since he was himself a member of the Schola—and a few of our seminarians joined those from St. Charles’ Seminary (Perth) in serving at the mass. Fr. Ed Travers, in preaching the homily, took up the theme of Hosea 6, stressing the need to turn utterly to God in confession of our sins: it is only to the extent that we acknowledge our brokenness before Him that we are open to His merciful love; after all, he who is unwounded has no need of mercy.

After the mass of thanksgiving, the faithful approached our newly-ordained priest one by one for his first blessing. To the seminarians, he imparted his blessing in the following manner, praying that, in due course, each one might turn out to be a priest after the heart of Christ: 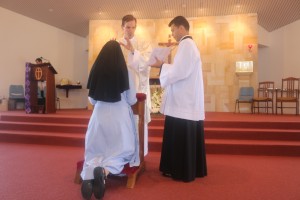 The Lord pour out upon thee the Spirit of wisdom and understanding, of counsel, knowledge, fortitude, piety and fear of the Lord, that thou mayest go forth a priest after the heart of God. May He bring to pass thy petitions and strengthen thine every counsel, and may He bless thee with every blessing heavenly and earthly, + the Father, the Son and the Holy Ghost. Amen.

After a break for refreshments, we gathered again in the church, and Fr. Matthew led the singing of the office of none (prayer during the day), followed by a recitation of the Divine Mercy chaplet, the clock having by then struck three.

The following morning, on Lætare Sunday (the fourth Sunday of Lent), our newly-ordained priest celebrated a second mass of thanksgiving in the church of St. Cecilia (Floreat), in the parish which he served as a deacon. This mass was likewise attended by a number of the seminarians from Good Shepherd. Fr. Matthew remains for the time being in the said parish as the curate.