Staff and Seminarians of the Seminary of the Good Shepherd in front of Lyndhurst house.

The celebrations of St Patrick’s Day included a Vietnamese barbecue, held at Patrick house. The food and celebratory drinks of Guinness carry on a tradition of celebrating this special feast day that goes back to the original seminary which was named after the Irish Bishop.

The members of Patrick house spent the day decorating the common room with green, orange and white streamers. In the afternoon one group went to Cabramatta to pick up the the mountain of meat required and another group went to shop for the other food and of course to purchase the ruby, alcoholic beverage sought after on this particular day – Guinness.  However, it was soon discovered that many other people had the same idea and so a number of liquor shops in the area had ‘sold out’ of the beer. It took three stops and about forty minutes to find a store that was still in stock of the coveted beverage. 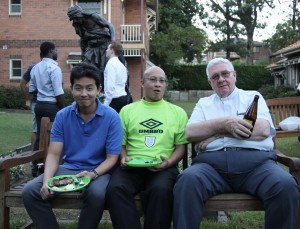 At the conclusion of Evening Prayer and Holy Hour at 6pm the cooking and party had commenced. Within fifteen minutes we had music, thanks to Huan Le and his very powerful speakers. By 6:30pm the celebration was in ‘full swing’ with all seminarians and two staff at the party. The team of cooks headed by John Pham where serving up an assortment of meats which lacked neither in taste nor quantity, and although I would struggle to describe the variety of flavours that I experienced, I can definitely say that I was not let down by the quality and certainly was not left hungry by the end of the night.

After the consuming of food and drink, a couple of rounds of ‘celebrity head’ was played. With the Rector Fr Danny Meagher winning the first round and the Spiritual Director Fr Ed winning the third round. There was also one round of charades which proved very difficult because there is limited way to convey the names of Biblical figures.

The night started to ‘wind down’ by 9pm, at this point I left the party to start cleaning up but many of the seminarians continued to enjoy the music played. As I recall the majority of the music was of Contemporary / Pop genre. There was a number of attempts to find traditional Irish folk music which failed and so U2 was concluded to be the closest contemporary equivalent. As the clean-up was drawing to a close the few remaining revelers occupied themselves with quiet discussion and a couple of card games. St Patrick’s Day finished for 2016 and as I had one final look at the seminary statue of St Patrick, still draped in a green cope, I thought of the blessings we receive at the seminary by the intercession of this great Bishop and Saint.