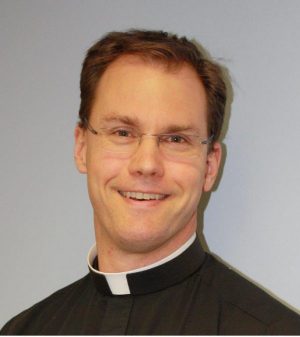 Father Michael de Stoop was born in Eastwood, a son of six children.  He himself is a graduate of the Seminary of the Good Shepherd where he commenced his priestly formation when it opened for the first time in 1996 (his first 2 years were in St Patrick’s College, Manly).  From the seminary he was appointed to St Charles Borromeo Parish, Ryde to prepare for his ordination to the Diaconate.  He was ordained a deacon on 4 August 2000. He was then ordained to the Priesthood on 8 June 2001 and took up his first appointment at All Saints’ Parish, Liverpool on 17 June 2001.  Fr Michael was then Assistant to the Dean at St Mary’s Cathedral, Sydney (2003 to 2009). During that time he was Cardinal Pell’s Master of Ceremonies, Director of Vocations, chaplain for Catholic Youth Services, and the NSW Chaplain for the Knights of the Southern Cross.  He then served as the Parish Priest of St Benedict’s Parish, Broadway from 1 March 2009 to 31 May 2015.  On 1 October 2015, Fr Michael was appointed Parish Priest of Our Lady of the Rosary Parish, Fairfield.  During this time, he was also appointed as the Dean of the Archdiocese of Sydney’s South West Deanery.  Additionally, he was appointed as the Director of the Permanent Diaconate Directorate.  On 13 October 2020, Fr Michael was appointed Rector of the Seminary of the Good Shepherd on 1 January 2021.

In 2013, Cardinal Pell appointed him to study at the Institute for Priestly Formation and Creighton University, Omaha, Nebraska, the USA during Summer Intensives where he completed a Masters of Christian Spirituality and a Graduate Certificate in Spiritual Direction and Directed Retreats in 2016.  Then, from 2017 to 2018, he completed a Graduate Certificate in Pastoral Supervision at Saint Meinrad Seminary and School of Theology, Saint Meinrad, Indiana, USA.