“To make good priests is the greatest
achievement in the world. It is impossible to
conceive of anything greater.”

A priest is someone called by Christ and sent out into the world to be a shepherd after His own Heart. But how do we at the seminary even begin to form another human being for such an extraordinary life?

We of course closely follow the teachings and instructions of the Church. But the first and fundamental truth is that God is at work in the Seminary. Our primary goal is to facilitate and encourage seminarians to be open to God so that His Spirit may heal, illumine and sanctify their hearts. We trust God to be the primary agent in formation.

The more a young man can be filled with the love of God, the more ardently will he love his people and the more fruitful his ministry will be.

With such a foundation, the seminarians and staff then seek to discern God’s will and, if it is discerned that a man does indeed possess signs of a vocation to the priesthood, he continues with the formation program. According to the teachings of St John Paul II in Pastores Dabo Vobis, there are four key areas to be covered in the formation of a priest:

A priest needs the human qualities to attract and lead people to the Kingdom of God. At the Seminary we pay considerable attention to the human virtues necessary for maturity, particularly the cardinal virtues of prudence, temperance, fortitude and justice. Formal input is offered regarding these virtues and seminary staff offer constant feedback to seminarians as to their growth in these virtues.

Priests are committed to lives of celibacy, obedience and simplicity. Following such a life is a long-tested path to holiness, but it does need considerable preparation.  Accordingly, much input is offered to assist men to understand the unique charism of priestly life and how to live these promises in a positive and life-giving way. In regard to the promise of celibacy, there is particular attention given to psychosexual development and the patterns of life necessary to support a healthy and loving commitment to celibacy.

In the senior years, seminarians are prepared for their role as pastors in parishes and as celebrants of the sacraments. Particular attention is given to developing their leadership and evangelical skills and we seek to implant within them the desire to be continually integrating all aspects of their human, pastoral and spiritual development.

If priests are to be resilient, truly evangelical and hopeful, they must be in close relationship with God. So prayer must become deep and habitual. Mass is celebrated daily at the seminary as are the Offices of morning, evening and night prayer. There is a daily holy hour and prayer of the rosary is encouraged. The sacrament of Reconciliation is offered daily. Annually, there is an eight-day retreat.

The Spiritual Director of the Seminary offers regular input and monthly reflection days and seminarians receive spiritual direction twice a month in the spiritual year and monthly thereafter. Attention is particularly given to growth in the theological virtues of faith, hope and love. In summary, seminarians are encouraged and assisted to grow in their prayer lives, in holiness and in union with God. 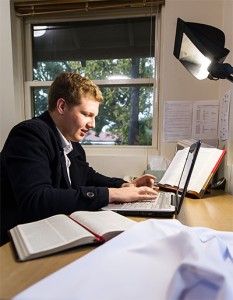 The seminary values its shared history with the Catholic Institute of Sydney (CIS) and CIS remains the principal provider of theological formation for seminarians. So the staff of CIS play an important role in the formation of seminarians. We aim to ensure that seminarians will be able to make connections between the academic work they do at CIS and their human, pastoral and spiritual formation.

In the spiritual year, seminarians do one subject in each of the two semesters, each of which focuses on spirituality. In the remaining years, seminarians study in the following general areas:

Seminarians are offered various kinds of pastoral work to prepare them for their lives as priests. Not only is the experience important, but seminarians are taught to reflect critically upon their experience so as to be constantly learning how to be more truly shepherds after the heart of Christ. A thorough grounding in professional standards is also offered as seminarians begin each new pastoral work. Further, seminarians attend annual workshops on safeguarding matters given by the Archdiocese of Sydney.

In the spiritual year, exposure is offered to the various works of mercy of the Church. Thereafter, the following general pattern is adopted:

Year 2: Teaching and exposure to the ministry of Catholic Primary schools;

Year 3: Introduction to the work of catechists in State schools and teaching in State secondary schools;

Year 4: Teaching and exposure to the ministry of Catholic Secondary schools and promoting vocations;

Senior Years: placements in Church ministries which assist those who are marginalized from normal daily life.